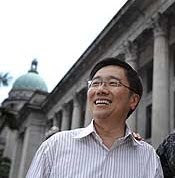 The upcoming National Art Gallery will have its own company to run it.
Called The National Art Gallery, Singapore, it is formed under the National Heritage Board.
This was announced at a press briefing on Tuesday by RAdm (NS) Lui Tuck Yew, Senior Minister of State for Education, and Information, Communications and the Arts.
He also announced the appointment of Mr Michael Koh, CEO of the NHB, as the CEO for the Gallery. Mr Kwok Kian Chow, currently the Director of the Singapore Art Museum, will also be Director for the Gallery.
'As a company, the Gallery will have more freedom to seek out its own partnerships and sponsors and establish something unique,' said RAdm Lui.
The Gallery will have full operational autonomy and its own board 'to allow it the necessary flexibility to be a nimble and effective organisation, and help fulfill its ambition in becoming a world-class visual arts institution," he added.
'This arrangment ensures accountability for its performance, financial discipline and responsible management.'
RAdm Lui also pointed out that under this arrangement, the Gallery would be able to tap and contribute to the national collection, which is under NHB's charge.
'With the Gallery under NHB family of museums, there is greater synergy in the sharing of resources in terms of expertise, capabilities and networks, as well as joint shows and festivals,' he said.
The $300 million Gallery to be housed in the City Hall and former Supreme Court buildings is on track to open in 2013.
The former Supreme Court building will house South-east Asia art, while the City Hall will have a Singapore Art Gallery, showcasing Singapore Art.
The Gallery will also have a Children's Museum within the City Hall, that is specially designed and programmed for school children and families. The public will also be able to access the rooftop plaza, which will have large public spaces, with a variety of F&B outlets and art installations.
Posted by Catholic High, Singapore at 6:19 PM