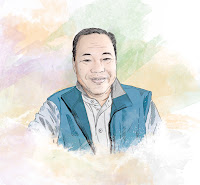 Chua Chin Kiat completed his pre-university 2 in 1971 at Catholic High School and was awarded the President Scholarship in the following year. He graduated with a First Class Honours in Bachelor of Science (Computer Science and Mathematics) from the University of Aston in 1975 on a President-cum-SAF Scholarship. He joined the Singapore Police Force in 1977.

Since assuming the post of Director of Prisons in 1998, Mr Chua has been instrumental in the dynamic transformation of the Singapore Prisons Service. Challenging mindset and old ways of doing things, his "Captains of Life" vision changed the mindset of Prisons officers from one of being custodians of prisoners to captains of change – to turn offenders into responsible and contributing citizens.
Under his leadership, the Singapore Prison Service introduced several breakthrough initiatives such as the Yellow Ribbon Project, the Community Action for the Rehabilitation of Ex-Offenders (CARE) network, the establishment of Kaki Bukit Centre (KBC) as a Prison School, the introduction of the Rehabilitation Framework for inmates and virtual prison visits. Through his efforts, the Singapore Prison Service is today among the world’s most progressive prison systems with impressive results for their rehabilitation initiatives.

He is currently the Chairman of Centre for Enabled Living, Singapore.

He recently published a book titled "The Making of Captains of Lives - Prison Reform in Singapore: 1999 to 2007" which tells a story of successful prison reform that brought the recidivism rate of prisoners down from 44% to 24%. In the process of this reform, the entire Prison Service was transformed from a custody focused mindset to a rehabilitation centred culture. This change was wrought despite the lack of enthusiasm of the then political leadership.

He describes his personal role in the reform effort, the methodology used to engender change in organizational culture and the struggles for the soul of the prison service and the hearts and minds of all those involved. These include organizations involved in the aftercare of ex-offenders, volunteers who came forward to assist in the efforts and the families and employers of offenders and ex-offenders. The journey ends with the Yellow Ribbon Project that now embodies the rehabilitative efforts for ex-offenders.

The Making of Captains of Lives is a personal account of a public sector leader who has helped built a highly efficient prison system in Singapore, providing a strong case study for successful change management and public sector leadership. It will encourage the hearts of all those civil servants who believe in serving their nations and societies by devoting themselves to a worthy cause in their day-to-day work.


“Chua Chin Kiat's clear-mindedness about what needed to be done and his dogged determination to get it done have transformed the way our prisons impact our prisoners. Other prison services study how their officers too can be ‘Captains of Lives’! Our prisoners owe a large debt of gratitude to him.


This is a story that is still unfolding. The balance between security and rehabilitation; resources and needs; what is desirable and what is achievable; being tough and showing a soft touch are issues that will confront any Prison Directors. This book should inspire and energise our prison officers to press on resolutely with the task of reforming our prisoners, to inject hope in their lives, supported by committed volunteers and buoyed by strong community support.”
Professor Ho Peng Kee
Former Senior Minister of State, Ministry of Law and
the Ministry of Home Affairs

“Mr Chua is a visionary, a strategist, a learning organisation expert, a father-figure, a mentor, and a true servant leader. We need more leaders like him. Evidence of his leadership is clearly shown in The Making of Captains of Lives.”
Mr Jason Wong
Senior Director, Ministry of Community Development, Youth and Sports &
Former Deputy Director of Prisons