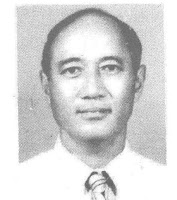 在六七十年代，李校友可是一个有名的政治人物。
他也关心校友与母校事务，担任第二与第三届（1971-1973）校友会主席。
以下是国家图书馆为他所写的简介。
Dr Lee Chiaw Meng
By Koh Lay Tin
Written on 2001-11-02
National Library Board Singapore
Dr Lee had studied in Catholic High School and Chung Cheng High School before he obtained his Bachelor of Engineering in 1960 at the University of Malaya. After graduation, he worked with PWD until 1961 when he went to Britain for higher studies and to obtain industrial experience.
He obtained a PhD in engineering from the University of London in 1965 and returned to join Singapore Polytechnic as a lecturer in civil engineering.
Dr Lee stepped into politics in 1968 when he scored victory in the General Election to become the MP for Farrer Park (13 April 1968 to 13 December 1980). He moved over to Tanah Merah (13 Dec1980 to 3 Dec 1984) when Farrer Park was abolished as a constituency. He was best remembered as the Education Minister, a portfolio that he held from 1972 to 1975.

He died of duodenum cancer on 23 May 2001, leaving behind his second wife, Lyn Lee, three sons and two daughters.