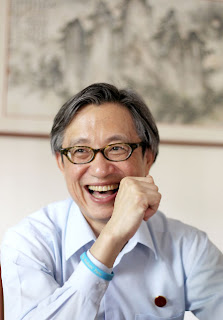 陈硕茂于1974/75年就读于公教中一/中二。最近因以在野党工人党的身份，在5月7日的大选中中选为国会议员而声名大噪。以下是Wikipedia对他的介绍：
http://en.wikipedia.org/wiki/Chen_Show_Mao
Chen was born in Taiwan and moved to Singapore at the age of 11. He studied at Nanyang Primary School, Catholic High School and Anglo-Chinese School. Chen was the president of the students’ council at National Junior College and graduated as the top student in Singapore for the 1979 “A” level examinations, scoring straight As in Biology, Physics, Chemistry and Mathematics B as well as A1s for General Paper and Chinese. Although Chen had yet to become a Singapore Citizen, he chose to serve National Service. During National Service, Chen served as an infantry platoon commander at the Fifth Singapore Infantry Regiment (5SIR) and as Brigade Adjutant, or DYS1, at the headquarters of the Third Singapore Infantry Brigade (3SIB). He took up citizenship in 1986, six years after serving National Service.
Despite graduating as the top student for the 1979 “A” level examinations, Chen did not gain admission into the local medical school. Thereupon, he pursued his undergraduate studies with Major in Economics at Harvard University. Chen graduated from Harvard University in 1986 and from Corpus Christi College, Oxford University in 1988, where he was a Rhodes Scholar. In 1992 Chen received his Juris Doctor from Stanford Law School and in 2005 received his M.A. from Corpus Christi College, Oxford University.


During his time abroad, Chen regularly returned home to Singapore to visit his parents, his sister and her family. In 2007, he visited the headquarters of the Workers’ Party of Singapore, and found, over a period of time, a meeting of minds on their shared goals for Singapore's future. Subsequently, he became a member of the Workers’ Party of Singapore. Upon his entry into Singapore politics, he was referred to as the Workers' Party "star catch" by the local press. This was mainly because Singapore's opposition parties had previously struggled to recruit top-calibre candidates with profiles comparable to Chen, due to the oppressive political climate which is present in the country.
Chen stated that he joined the Workers' Party because he believed that "the best way to ensure good governance for Singapore is through the growth of a competitive opposition that offers a credible alternative to the party in government". During an interview, Chen frankly explained why he decided to join the Workers' Party of Singapore:
Certainly, my friends in the PAP are in a better position to formulate policy and implement policy in the short term, and therefore, have a greater impact on people's life, people's livelihood over the short term. But I think what I am doing is just as important. Perhaps more important over the long term and that is to help build up a credible opposition that in time is capable to form an alternative government.
On 27 April 2011, Chen submitted his candidacy for the five-member Aljunied Group Representation Constituency with the Workers' Party of Singapore chief Low Thia Khiang, Chairman Sylvia Lim, Pritam Singh, a postgraduate law student, and Muhamad Faisal Manap, a freelance counsellor. The incumbent team included two cabinet ministers and one Senior Minister of State, and was helmed by the prominent Foreign Affairs Minister, George Yeo.
During the intense nine-day campaign period that followed, Chen was singled out by leaders of the ruling People's Action Party (PAP) for criticism. The PAP's Organising Secretary and Minister for Education, Dr Ng Eng Hen, questioned Chen's motives for entering politics in a letter to The Straits Times. Ng also questioned whether Chen would be able to relate to the aspirations of Singaporeans after having spent most of his career in the United States and China. The PAP's co-founder and former Singapore Prime Minister Lee Kuan Yew also suggested that Chen could return to China after losing in the election.
Throughout the campaign, Chen conducted himself in a humble and statesmanlike manner, refusing to get drawn into mudslinging contests despite numerous provocations from the PAP. However, he sought to emphasize his ties to Singapore, addressing rally crowds in Malay and Hokkien to dispel the perception that he was 'foreign'. He also highlighted at a Workers' Party rally that he came to Singapore at a young age with his parents and sister, that he served National Service, and that he owns an apartment in Bishan and frequently commutes by MRT train.
On 7 May 2011, Chen and his Workers' Party team won the Aljunied GRC with 54.71% of the total votes cast, with Yeo's PAP team obtaining 45.29% of the votes. The victory was considered historic because it was the first time in history that a GRC had been captured by an opposition party, and the first time ever that two cabinet ministers had lost their seats in a general election. Chen became the first foreign-born opposition MP in the history of Singapore, while his teammates Sylvia Lim and Muhamad Faisal Manap became the first-ever female opposition MP and the first-ever Malay opposition MP respectively, since independence. Also, together with Pritam Singh and Muhamad Faisal bin Abdul Manap, he became the first 3 opposition MPs to be elected into parliament at the first attempt.
Posted by Catholic High, Singapore at 1:30 PM