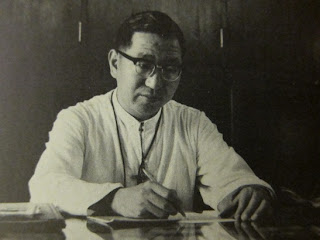 Our ex-teacher Brother Noel Wang has passed away on the afternoon of 8th April.  Brother Joseph, our ex-Principal shares his thoughts and memories of Brother Noel.
_____________


On the demise of Bro. Noel Wang, Friday afternoon, 8th April , when I heard the news from Bro. Thomas Chin, my immediate superior, I was about to have my interview with an important personage none other than Rev. Bro. John Klein, an American, the General Councillor from Marist Brothers Generalate, Rome, My personal feeling is that of perplexity, very difficult to describe.
I know Bro. Noel Wang (Wang Shouan Hui) since our childhood days: He was born in Baxian, near Beijing on 25th Dec. 1927 Christmas Day-- Noel in French, and I was born in Beijing 21 Nov. the same year. So I was more than a month his senior. But in real life, I was his senor all the time: In secondary school juniorate and novitiate, Chala, Beijing he was a year behind me, I left China in 1949, he came out of China in 1950 after the Liberation, and when I finished my B.A. at Marist College Poughkeepsie N. Y. and came to teach at Catholic High School, Queen St. Singapore, he managed to come to Bukit Mertajam and teach in a Primary School. When I was appointed Principal at Catholic High 1960 , he managed to work under me as Senior Teacher Primary Morning Session till I left CHS in 1974, he then was shifted to Maris Stella High School to teach.
Somewhere between 1964 and 1968 he had his study leave to obtain his B.A. Chinese Lit. at JouHai University, Hong Kong before re-joining the Catholic High staff.
I spent 14 years at St. Francis Xavier's College, Hong Kong, Kowloon and 6 years Rome, Italy then finally I settled in Singapore 1994 at Flower Road , Upper Serangoon to live in the same Community with Bro. Noel Wang after his having worked in Singapore , Ipoh, Taiwan Kaohsiung in ongoing formation in Rome at Fratelli Maristi EUR Roma where we could meet for more than half a year.
Well, you see I could very well say Bro. Noel has been my life companion even during his long, long sickness in the last few years of his earthly abode. I could very well confirm that the late Bro. Noel was up-right in his conduct, sincere to his belief and an outstanding educator ...
Bro. J. D. Chang (Chang She-Dien)
Posted by Catholic High, Singapore at 11:14 AM