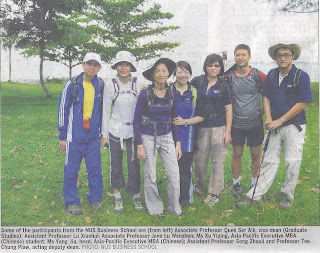 Quek Ser Aik is an old boy of Catholic High (Sec 4, 1969). Here is a report in the Straits Times.
May 10, 2010
Going to Gobi
By Nicholas Yong
ASSOCIATE Professor Quek Ser Aik is heading to the Mo-Kia-Yen Gobi Desert for a third time for the annual Gobi Desert Business School Challenge next week.
At 56, he is the oldest member of the 10-man team from the National University of Singapore (NUS) Business School, which will be taking part in the 110km trek across the desert for the fourth time since the event started five years ago.
He says: 'It is a strange feeling to be walking 'alone' in the desert. It is so big and dangerous, and there is a very real sense that you are the only person around for a few kilometres.'
The 110km endurance challenge re-traces the journey of the Tang dynasty monk Xuanzang, or Tripitaka, on his journey to the West along the Silk Road almost 1,500 years ago. It is organised for networking purposes.

From May 16 to 19, nearly 240 people from 12 business schools in China, Hong Kong, Taiwan and Singapore will cross the desert on the borders between Gansu and Xinjiang provinces in China.
The NUS team comprises six men and four women, including staff and students. Among them are permanent residents, Chinese nationals and a German student. Last year, NUS finished last out of 10 teams.

Assistant Professor Song Zhaoli, 39, second-time participant and team leader this year, says it was because they did very little training this year. Subsequently, five members got injurede on the first day and struggle to carry on. They were also unfamiliar with their GPS equipment and were hampered by poor quality equipment - their water bags leaked, leaving them dangerously short of water.

Prof Quek adds: 'To be short of water in the desert is no joke. SOme team members almost got heatstroke. One female student was even hallucineting.'

Nevertheless, everyone perservered till end in four days.

This year, the team will be better prepared. On top of individual training, they have been doing thrice-weekly 7km treks with 5kg backpacks as a team and recently did a 28 km trek at MacRitchie Reservoir. They plan a 40km trek before setting off.

Professor Teo Chung Piaw, 44, acting deputy dean of the Business School, is going on trek for the first time. 'I have been started walking the 8km from home to my office, which I never thought I would do before.' he says.

Prf Quek adds, 'This year, we are prepared because of Professor Song. He insisted that we do our preparation. In previous years, we hardly trained. Last year, I basically just showed up.'

The beauty of the environment is why Prof Quek is going for the third time. He says: 'At the end of the trek, it is so exhausting that you just remember the romantic parts. When you are walking, your mind is clear and it's very good time for reflection about work and family and different thimgs. Some people do it by the poolside, I do it in the Gobi Desert. You also remember the camaraderie, just like in the armi.'